From 1959 a small fee for the meditation was taken. Maharishi then described a three-year plan with the goal of training 25,000 meditation teachers from 1960 onwards. A well known disciple was Charles F. Lutes(1912-2001),  a Los Angeles concrete salesman, who was initiated in Transcendental Meditation in 1959. He travelled with Maharishis team several times to open hundreds of meditation centres. In 1969 he became a TM teacher.

Charles was married to Helen (1902-2001), who learnt TM in 1959 with her husband. Maharishi appointed Helen as the first President of his Spiritual Regeneration Movement, SRM.

In 1960 Maharishi visited England again, where he lived first in Chelsea and then in the luxurious home of his disciple Henry Nyburg in Wiltshire. He held, among other things, in the Guildhall in Cambridge lectures and founded the 'movement of spiritual renewal of Great Britain' with center in North London.

Afterwards Maharishi traveled to Germany and founded the first group of the SRM (Spiritual regeneration movement) and the Sims (Students international meditation service) in Bonn.

People who believed in a renewal despite the content had probably no idea of indian spirituality (at that time a standard) or believed to have found a high guru in the Sari.

In 1964 Maharishi held two courses in the austrian village Obergurgl.

In 1967, Maharishi spent nearly a year at the Ilse-Eickhoff Academy near Bremen in Germany.

Mrs. Eickhoff was an experienced esoteric, and she was later seen in the movement as a realization of the 'Mother Divine'. Many followers held Maharishi even later for a Satguru - despite the coming confusions. 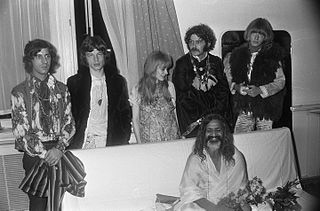 In 1967, Maharishi succeeded in interesting the Beatles, who visited him in 1967 in Rishikesh, and soon thereafter (unfortunately ..) produced longplay records like 'Getback' and 'Rubbersoul'.  They left him soon just like the Rolling Stones. The beachboys, too, changed their style and produced the LP 'Smiley smile'... Later several other musicians like Mr. Donovan were also attracted, and some stayed with the movement...

In the '68s, Maharishi could score points with his sari and flowers in his hands like others...

In 1969 appeared the german translation of his book "The Science of Being and the Art of Life" (authored translation by Nikolaus Graf Blücher), in which he praised his simple meditation as a panacea for all areas of life.

In 1970, Maharishi held a course at  Kössen in Austria, and soon thereafter also courses in Italy and Spain.

In 1970, the Maharishi also held a TM teacher training course at the Victorian hotel in Poland Springs, Maine, with 1,200 participants. Later he held a similar four-week course with 1500 participants at Humboldt State College in Arcata, California.

In 1974, Maharishi gave the Neue Züricher Zeitung an interview, in which he described his SCI (Science of Creative Intelligence) as the solution to all problems. The TM - movement bought the castle hotel of the suisse village Seelisberg at the Vierwaldstädter See, where Maharishi parallel resided there in a house of his own. 1983 Mahrishi left Seelisberg in direction  Netherlands.

The TM initiator presents a puja at the meditation - inauguration - ceremony before the painting of Guru Dev and attempts to arouse the false impression of the connection to the guru dev and his holy tradition. But Maharishi is completely rejected for several reasons inclusive his wordgovernment-plans. He could not prove a mission  from Guru Dev. His teachings are very different from Shankaras Advaita vedanta and from Smarta Sampradaya.

"Ashtanga Yoga : Yama, niyam, aasan, praanayaam, pratyaahaar, dhaarnaa, dhyaan, samaadhi. These are the eight limbs of yoga. A guru takes a student one by one through them. For this, the Guru takes NICHTS from his disciple. He does it out of kindness and from the feeling of doing something good for his student. " Shree Shankaracharya Swaroopanand Saraswati, 1987

First there was probably only one mantra 'Aing' (after Kropinski) for all. From 1968 there were probably already three mantras (Richrad Blakely: The secret of the mantras).

After years the regular practitioner could get several so-called accelerators (fertilizer) for a paid initiation, which consisted at first of a sleep technique that was later redrawn, and then of stepwise added syllables to the first mantra (eg 'aing namah').

In the 70s Maharishi began to spread his laugable "Science of the Creative Intelligence," which is still part of the course offers in internal courses, and the movement tried to present Maharishi as a physicist (with a degree at the Allahabad University in 1942).

Thereto the sect presented an irrational psycho-physical worldview with various indian goddesses (such as Durga, Brahma, Saraswati, Indra) and the so-called 'natural law' and a unified field as a basis of all things - with a false relation to modern Quantumphysics.

A doctor Wallace had published measurements of scalp currents on TM meditators and identified elevated alpha waves (Wallace, R.K.: Physiological effects of Transcendental Meditation, 1970), which were referred to everywhere, and which were often interpreted as a 4th state of consiousness(turiya) or even as a sign of yoga - samadhi.

In particular, alpha waves and coherence are no proof of transcendence or even of samadhi states, as in Ashtanga yoga, but merely a sign of deep relaxation. Electrical potential changes can also occur with Chinese respiratory exercises. In  Vipassana gamma waves are increased.

Recent research in this regard is rather for gamma waves. Gamma waves are a higher-order control frequencies, which synchronizes and merge the brain areas. They also appear during lucid dreaming. Thus perceptions but also states of consciousness arise.

From a scientific point of view, there is no transcendental awareness - despite all US doctoral theses and interpreted and partly fake measurements and studies on the part of the TM movement. From the point of view of science, it is always a question of interpretations or of intuitions, which, of course, is no disproof of the non-existence of  spiritual bodies etc..

Also, this meditation does not quickly allow the spiritual experience of his "own being", i.e. to be a mirror of pure consciousness (whatever that is, at least the experienced is not the Hindu CHIT or even an Ishvara samadhi of the Asthanga yoga) or not to cultivate this experience permanently, since the human being is not spiritual (like the Jivatma is) with a few exceptions but must gradually develop in this respect.

Transcendental consciousness is at least the hindu Buddhist plane(Maharloka), on which a beginner does not have a body, which he has to build up by a long time yoga-practice, which must seem curious to the unprepared average man('body?').

In 1974 Maharishi postulated that the quality of life would improve appreciably (...and of course his revenues ...), if 1 per cent of the word population would practice his Transcendental Meditation technique.

This was  propagated as the "Maharishi Effect" (alleged improved coherence in world consciousness). According to Maharishi, this effect was observed in 1974 in 16 cities according to an analysis of criminal statistics.

The author Ted Karam, for example, wrote that there are numerous studies on the Maharishi effect, which include a gathering of more than 4000 people in Washington DC in the summer of 1993 (Karam, Ted: Jumping on Water, Awaken Your Joy, Empower Your Life, 2005).

Finally, he met Guru Muktananda from southindian Siddha Yoga in Switzerland and had a lively exchange. But he let the band recordings with Muktananda destroy soon after.

Maharishi had since 1959 kept open the possibility of obtaining the Siddhis mentioned in Patanjalis Yogasutras, but Patanjali warnes in his Yogasutras against the binding effects of such forces.

Maharishi then put the formulas of Patanjali to the test with a small group of meditators, attracting over 1,000 aspirants. However, it lacked a demonstration of such magical abilities. After completing a Siddhi course, the title of an 'Executive Governor of Consciousness' waved.

Instead of focusing on 'current research', Maharishi announced in 1977 the 'Year of the Ideal Society'.

Another blinding step was the founding of a university for management (MUM), which still exists today in a modified form in Iowa.

The fact is that MUM is not recognized in germany and other countries as university. A main theme is the consciousness-based education.